The "keyhole surgery" operation to reconstruct the ACL involves replacing it with other strong tendons from areas around the knee. Two main grafts are in common use: the Hamstring Tendon graft and the Patella Tendon graft. Both are considered to be equally good and the choice usually depends on the surgeon's preference.

Surgery is performed under general anaesthesia and usually takes 1-1 1/2 hours, with the main part of the procedure performed via keyhole surgery (arthroscopy). 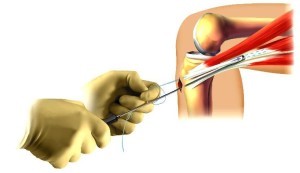 The hamstring graft is made from the semi-tendonosis and gracilis tendons, which are cord like structures behind the inner aspect of the knee. These two tendons are usually taken through a small incision on the front of the tibia and are folded in to make a four, five or six stranded structure.

The patella tendon graft is made from the central strip of the patella tendon that runs from the knee cap (patella) to the tibia; a small piece of bone is kept attached to the ligament at each end. Bone graft from the tibia is inserted at the end of the operation into the kneecap to restore contour and to help with kneeling.

The aims of surgery

The aim of the operation is to prevent repeated episodes of giving way or buckling of the knee. Published research shows that approximately 80-90% of patients consider their knee to function normally, or nearly normally, after surgery.

Full contact sport is allowed after rehabilitation but not everyone gets back to his or her previous level. Return to sport depends on the time period since injury and other personal or work factors. Not everyone achieves a full excellent result.

It is important to emphasize that the new ligament is not a 'normal' ligament. Re-creating stability with the graft is only one aspect of attempting to improve knee function after injury. Other problems such as joint surface damage or meniscal tears may co-exist which can interfere with the joint’s ability to tolerate high loads associated with sport and other arduous activities. Also, the wear-and-tear arthritis associated with ligament injury is not necessarily prevented by reconstruction surgery, and the risk of developing osteo-arthritis of the knee in later life is higher once the ligament has been torn.

Problems can occur. Some are minor, but some may need another operation to help. It is clearly important to understand these risks before undergoing surgery.

The main risks include:

You may have a series of very normal concerns after surgery. The following is a list of common events that can occur:

Swelling: Swelling or “effusion” in the knee is usual until up to three months after surgery. The main aim of the first phase of rehabilitation is to reduceswelling.